The percentage of ship victories in the docks of World of Warships 0.9.7 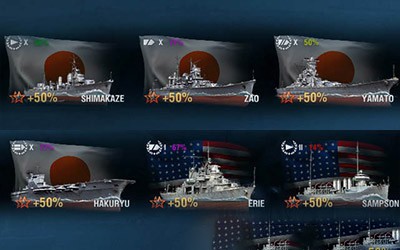 The percentage of ship victories in the docks of World of Warships 0.9.7

A handy addition to the port in World of Warhips, it will display the win percentage for each of your ships right in the so-called “ship carousel”. After installation, after entering the game and getting into the dock, you will see that in the carousel on the icons of the ships, next to the level display, multi-colored inscriptions have appeared. So they display the current win percentage.

In general, knowing the ratio of victories to defeat for a particular ship is very convenient, because you can understand which vehicle or class of equipment has the most victories and, perhaps, plays the best. Of course, such data is not very correct, because if there is only 1 battle on the ship and this is a victory, then the mod will display 100% of victories. So this data should be treated with the understanding that the more fights, the more defeats, as a rule, because you can never never lose.

It should also be added that the display of the percentage of victories has different colors, but here everything is like in other mods with ratings, like an eratomer.