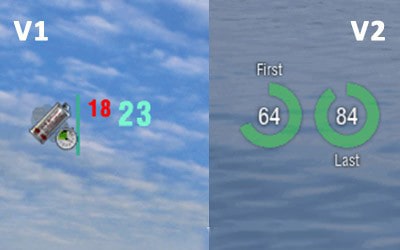 A modified smoke timer in two different versions, this mod replaces the standard smoke timer, which, in the opinion of the players, is not very convenient.

Previously, World of Warships did not have such a timer, which is why this mod was created, but then the developers realized that the timer was necessary and introduced it into the game. But they did everything wrong, so now the smoke timer for Wows is still relevant.

Installation
1) Select the desired option and copy the contents to the World of Warships \ bin \ 2698086 \ res_mods \ 0.9.7.0 folder
2) In the game settings, disable the display of the smoke screen timer