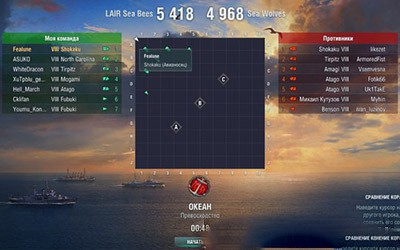 The mod slightly modifies the World of Warships battle loading window, adding a minimap to the main screen. Now you can not switch tabs during the battle load, in order to see for example the spawn spaces of the ships.

You can also now move your mouse over any ship on the map and see the player’s nickname and information about the ship, which will be useful for players who play in the clan, because this allows you to think through the tactics of this battle in advance.

Well and other small edits that add convenience. For example, standard ship icons were removed so as not to take up space.

Now you can configure the display of the mod directly during the battle load. A special menu has appeared in the upper left corner. More details on the video.

Compatible with other mods
If during installation they write to you that the USSExpressionsLoader.xml file already exists, skip it without replacing it, and after installing the mod, find this file in the gui \ flash folder, open it with notepad and before the line

Installation
Copy the contents of the archive to the World of Warships / res_mods / 0.9.1.1 folder